16 Dec What are we trying to achieve?

Posted at 12:23h in News by Charlotte 0 Comments
0 Likes
Share

It occurred to me that the confusion over the purpose of RS, highlighted in recent posts, is the real problem here.

Which of the following claims about Religious Studies is true – and which of the true claims most important and least?

It is clear that different people have different perceptions of the purpose of Religious Studies – and this impacts on what content and approaches to assessment they see as appropriate. Obviously, no one subject can hope to deliver ALL of the above; by necessity, reformed specifications will have to be geared towards 1-3, not 10, different aims in order to avoid the degree of diversity that has characterized GCSE and A Level Religious Studies specifications in the past and which has made the subject difficult to standardize, allegedly subject to grade inflation and open to criticism from universities who have no idea what students have studied, even if they have taken the subject at school.

The past five weeks have forced people to confront the need to make difficult choices in a short time-frame.  There will be winners and there will be losers… but surely it is important to have a rational, open discussion about what is going on and why, rather than leaving it to who shouts the loudest, who has more friends and followers, or who was offered a seat at the table in the planning process?

A few points to throw into this discussion… 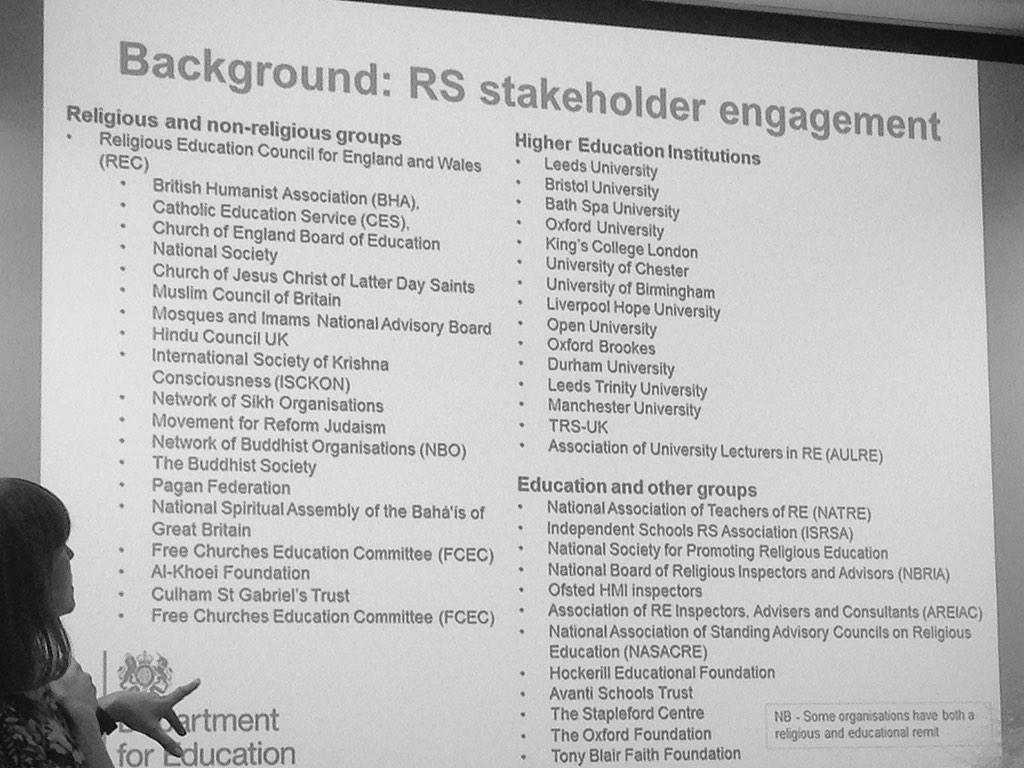 1) The process by which we have arrived at the draft content has been skewed towards the interests of those who see Religious Studies in terms of 1, 8,9 and 7, but has largely excluded from discussions those with other perceptions of the subject.  The basic assumptions behind and structure of the DfE proposals are, therefore, inherently controversial and seeking comments on the detail rather misses the point.

2) Further, the voices of those who see Religious Studies in terms of 7 (the Higher Education institutions here) were largely ignored in coming to the final draft – AULRE, TRS-UK and the Universities WERE given early drafts to comment on, but had to turn round their replies so fast that they could not consult or reflect meaningfully.  Further, several of those involved in the process cannot see any evidence of their replies in the draft as it now stands. In addition, AULRE and TRS-UK represent a narrow band of university courses in relation to those students with Religious Studies actually end up on. No consultation with a wider body of HE stakeholders has been attempted; the list of universities consulted is remarkable for being a list of departments currently advertising discrete courses in the study of religions in addition to, or instead of, more traditional courses in Theology or Biblical Studies or more popular courses in Philosophy and Theology or Philosophy and Ethics.  To use an analogy, would it be reasonable to see Biology GCSE and A Level only in terms of feeding Biology degrees – what about Medicine, Biomedical Sciences, Botany, Genetics, Forensic Science, Pathology, Physiology, Biochemistry…

@iTeachRE @NATREupdate @reonline_tweets AULRE members were given 3 days to comment on early much different draft on A Level. No other info.

3) It will be problematic to base Religious Studies on a fair combination of 1, 8, 9 (and 7), because seeing Religious Studies in terms of BOTH teaching young people about their own religion AND a sociological exploration of the phenomenon of Religion, in terms of BOTH certificated courses in statutory Religious Education aiming to promote tolerance and community cohesion AND preparing young people to take degrees in Theology and Religious Studies is fraught with tension.  Is studying religion “from the inside” confessionally compatible with studying it “from the outside” non-confessionally?  Is promoting a political agenda compatible with academic rigour, credibility and scholarly independence?

4)  The heavy bias towards consulting religious groups is odd, come to think of it.  Consider an analogy; would the DfE consult the representatives of groups represented in History or Geography specifications in such a process?

Sorry, the comment form is closed at this time.